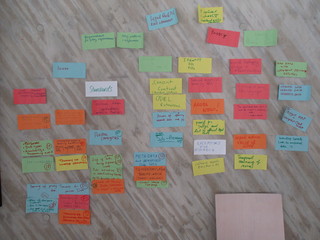 At the end of the W3C workshop on Data Privacy Controls and Vocabularies in April 2018, the participants drew up a list of priorities, which included in particular a list of vocabularies or taxonomies that should be standardised. Such vocabularies can help to communicate about the GDPR and about individual privacy policies (for explaining, comparing or translating them), distinguish different purposes for data collection, describe characteristics of databases of personal data (such as the method of anonymisation), provide a common notation for privacy research, and several other things. The hope is that such vocabularies also enable automatic application and verification of privacy policies, something we in SPECIAL (but not only we) are working on.

W3C offers a platform for creating discussion groups and preparing plans for standardisation, in the form of Community Groups and Business Groups. We therefore created a Community Group, with the name Data Privacy Vocabularies and Controls (DPVCG).

We already invited the participants of the workshop to join the group, but the group is open to everybody with an interest in creating (Linked Data) vocabularies for privacy. From the current draft charter:

The CG invites all interested stakeholders to contribute, particularly those people who expressed interest at the Vienna workshop, but as all W3C CGs considers itself an Open Community with the intention to grow to a critical mass to finally bring its results into a W3C working group for standardization.

We hope and expect the group will grow during the summer, while it refines its plans and processes. Detailed technical discussions will probably start in earnest towards the end of the year.

The idea is that the group also organises face-to-face meetings, at privacy conferences and similar events. The MyData conference in Helsinki in August 2018 could be a first venue. The European Big Data Value Forum in Vienna in November 2018 could be another.

Participation in the group is free, but you need to register. See the section ‘Participation’ towards the end of the group's home page. (If you already have an account for some other W3C group, you can re-use the same account; just click on ‘join the group’)