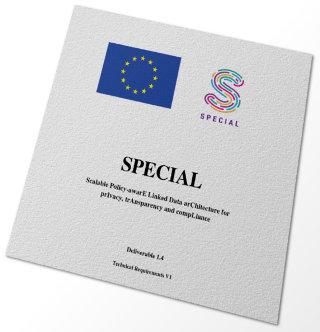 The deliverables of the first nine months of SPECIAL are now available.

These are reports written during the first few months of the project. They can be downloaded in PDF form. The reports describe diverse subjects around SPECIAL's model for Big Data & privacy processing, quality control and standardisation. They also include descriptions of the current technical and legal context, such as EU regulations, public ledger technology and the big-data platform (created by the BigDataEurope project) on which SPECIAL's backend software is built..

Several of them are first versions and will be updated after more research has been done in the next few months.